Founded in Florence in 1860 as a workshop, shop and school of watch-making for many decades Panerai supplied the Italian Navy specialist diving corps with precision instruments. Panerai timepieces are a natural blend of Italian design, swiss technology and passion for the sea, as evident in their 4 collections: Submersible, Luminor, Luminor Due and Radiomir. 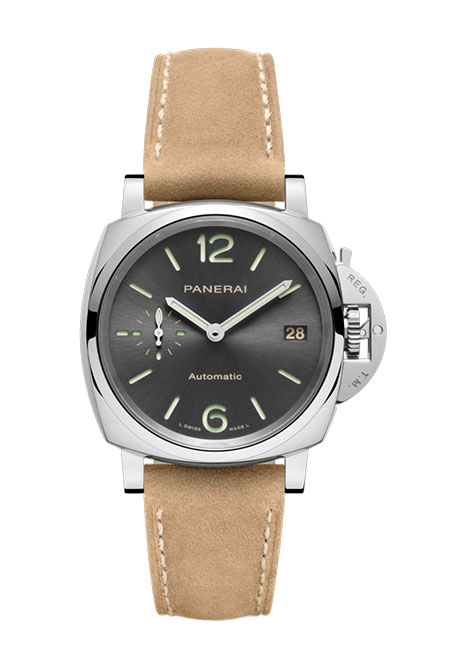 Founded in Florence in 1860 as a workshop, shop and school of watch-making for many decades Panerai supplied the Italian Navy specialist diving corps with precision instruments. Originally created to be used deep underwater, Panerai watches are known for their unparalleled legibility and luminosity in the dark.

In 1997 the brand was acquired by the RichemontGroup and launched on the international market. Today Panerai develops and crafts its movements and watches at its Neuchâtel manufacture, combining Italian design flair and history with Swiss horological expertise.

1916 – Panerai files the Radiomir patent – a radium based powder that gives luminosity to the dials of timekeeping devices produced for the Royal Italian Navy.

1936 – First prototypes of the “Radiomir” are created for the frogman commandos of the Royal Italian Navy.

1937 – The patent of the Sandwich dial is registered..

1949 – A new self-luminous substance, Luminor, supersedes the radium-based paste, which the Luminor collection is named after.

1950 – The patent for the crown protecting device is registered, becoming a distinctive feature of all Luminor models.

1993 – Panerai launches first collection sold to the public – three limited edition models taking inspiration from those created for the naval commandos of the Second World War.

2002 – Opening of the first Officine Panerai Manufacture in Neuchâtel, Switzerland.

2005 – International launch of the first Officine Panerai movement, the P.2002: a hand-wound calibre with GMT function and 8-day power reserve.

2015 – Launch of the first Carbotech watch, made of a composite material based on carbon fiber.

2016 – The launch of the Luminor Due collection, Panerai’s thinnest and most versatile timepieces to date.

2018 – Panerai launches the first mechanical watch whose case is made of BMG-TECH™ – a bulk metallic glass that is harder and lighter than steel.

Today, Panerai is known as a disruptive innovator in products and experiences, offering a number of unique and spectacular travel experiences alongside a selection of limited edition pieces. As part of its ‘Laboratorio Di Idee’, Panerai is committed to raising the standards and performance of high watchmaking in its continuous search for innovative technical solutions to create revolutionary products.