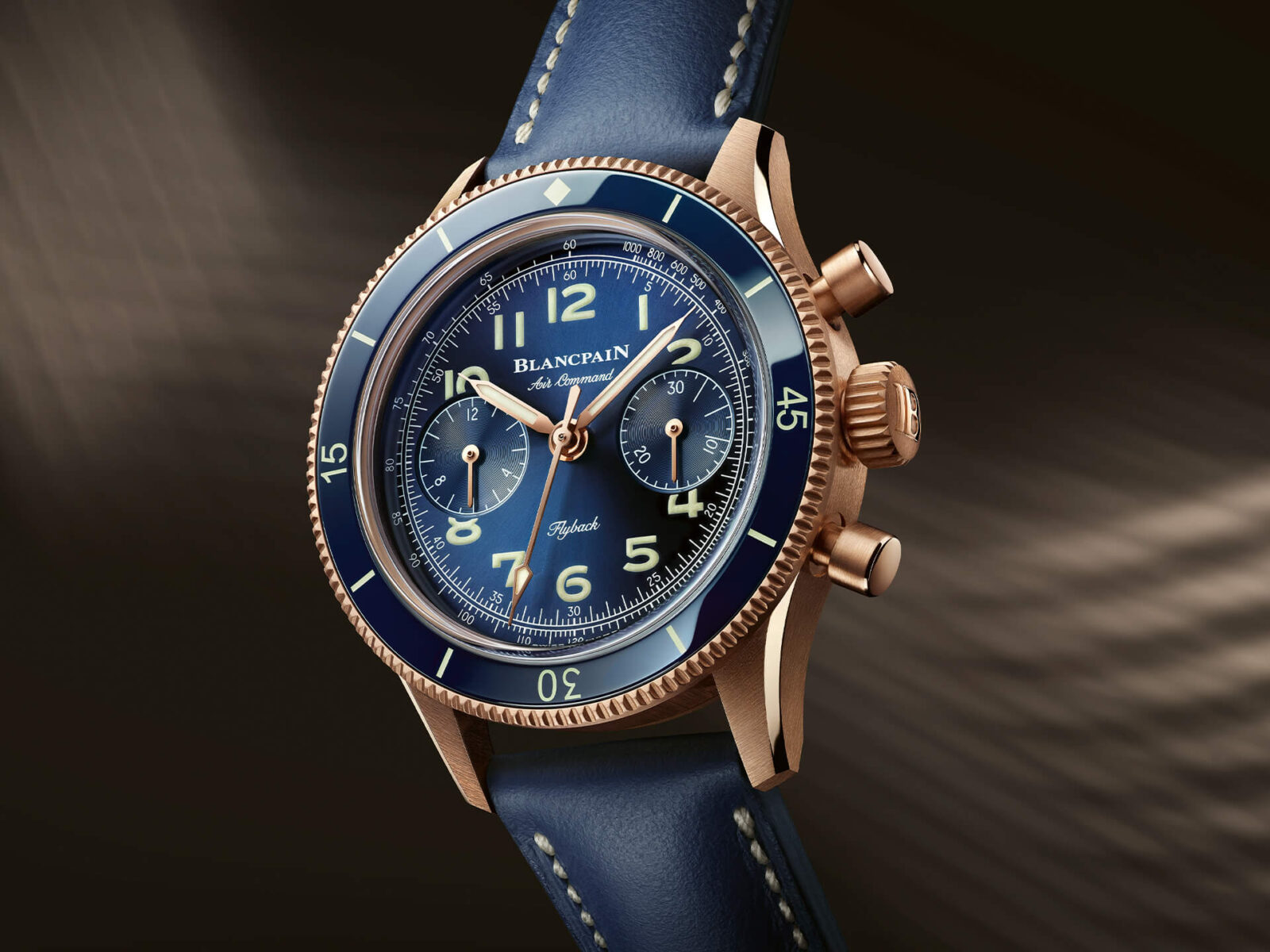 Blancpain makes a welcome new addition to its Air Command collection in 2022, with the unveiling of a new 36.2mm Flyback Chronograph. Offering a smaller case size without compromising on the model’s legendary style or functionality, this latest iteration of the AC03 is the ideal choice for those with slimmer wrists. Equally pleased will be aficionados who prefer a more understated case size. Available in two case metals – titanium or 18k red gold – and paired with a striking blue dial, this new model is sure to be every bit as popular as its larger sibling.

The Story Of The Blancpain Air Command

When it comes to intriguing back stories, the Blancpain Air Command delivers in spades. First coming on the scene in the 1960’s, watch historians speculate that the model was created as a prototype pilot’s watch for the US Air Force, but no orders were placed and the project was not pursued. No official documentation has been found about the original version, leading scholars to form the opinion that it was never commercialized or produced in series. However, a handful of examples have surfaced over the years, with premier watch auction house Phillips in association with Bacs & Russo selling a prime one for over $100k back in 2016.

Circa 50 years later, Blancpain made the bold decision to reissue this mythical model in a 500-piece vintage style edition. Offered in a steel case measuring 42.5mm x 13.7mm high, it featured a two-way rotating steel bezel with ceramic insert and Superluminova® hour-markers. This inaugural version featured a sunburst-black dial that was almost a direct recreation of the original. From the Arabic numerals to the inner tachymeter scale, to the bi-compax layout of the chronograph registers.

The response from watch collectors was immediate and resounding; more, more, more! Heeding this call, Blancpain followed up with an additional two 42.5mm models last year, and this time they formed part of the permanent collection. The only thing missing by this point was a smaller case size option. And once again Blancpain has delivered.

At first glance the new, smaller version of the AC03 looks identical to its larger counterparts. And that’s because it is. Which is exactly what collectors were hoping for. Unfortunately, sometimes reducing the case diameter from the original means compromising on legibility, or the layout of the dial, or both. But not so here. Blancpain has managed the almost impossible feat of compressing the dial somewhat without compromising legibility. Or losing any of the sub-dials or the like. It is quite simply exactly the same watch in a smaller, more compact package.

Framing the rich blue dial with sunburst finish is a rotating bezel with blue ceramic insert complete with luminous 60-minute scale. Time is displayed centrally, along with the chronograph seconds, while the two sub-dials track elapsed minutes and hours accordingly. Large, luminous Arabic numerals mark the hours and there is a tachymeter scale running around the periphery of the dial.

Blancpain has also been able to make the satin-brushed and polished case thinner (11.5mm high vs 13.7mm) and this is thanks largely to the use of the in-house calibre F188B (in place of the larger F388B found in the 42.5mm models). It’s still a self-winding movement, of course, equipped with a vertical clutch, column-wheel and flyback function for the chronograph, ensuring smooth operation at all times. Anti-magnetic silicon parts are used for the regulating organ. Visible through a sapphire caseback, the movement is expertly decorated, with polished bevels, brushed bridges and snailing.

Completing the look is a matching matte blue calf leather closed by a pin buckle, either in titanium or gold.

To register your interest in this sought after piece, contact Watches of Switzerland now, the new 36.2mm Blancpain Air Command AC03 is a great choice for your daily go to watch. Don’t let its reduced size fool you though, this is a model that is sure to turn heads wherever you wear it, yet it remains discrete enough to be suited to just about any occasion. Enquire now to learn more about this exciting new release from Blancpain.