Breitling’s all-purpose watch for your every pursuit, at home both on the red carpet and at the beach. Introduced in 1984, the Chronomat celebrated Breitling’s centenary in style and marked the return of the mechanical chronograph. Nearly forty years later, the Chronomat is set to appeal to men and women of purpose, action and style. 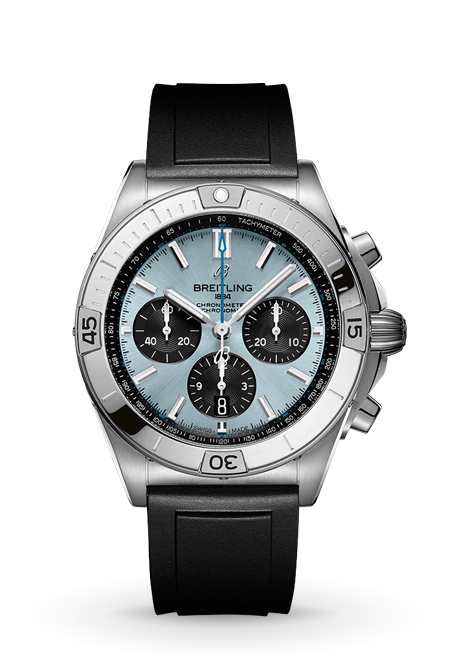 When the Breitling Chronomat was launched in 1984, it marked a welcome return to mechanical Swiss watches, which had all but disappeared when quartz watches dominated the marketplace in the 1970s. Inspired by the Frecce Tricolori watch, which had been developed and launched in 1983 in collaboration with the famed Italian aerial squadron of the same name, the Chronomat celebrated Breitling’s centenary in style and marked the return of the mechanical chronograph on which the brand had built its global reputation to its rightfully prominent place. This technical legacy, combined with particularly stylish design codes, made the Chronomat the ultimate sport-chic watch of its era, an expression of aesthetics and confidence that made the chronograph “cool” again.

While the Chronomat has long been established as the watch of choice for aviators, it also found a passionate following among people whose adventures took place not only in the air, but also on land and at sea – above and below the surface. In fact, its versatility added to its allure in the late 1980s and early 1990s as its tachymeter attracted the interest of Formula 1 teams, while its reversible rider tabs made it ideally suited to regattas.

Breitling CEO Georges Kern says: “The 1984 Chronomat occupies a very important place in our modern history. It was the watch that boldly proclaimed Breitling was staying absolutely true to its roots. When much of the industry focused their efforts and energies on quartz watches, the Chronomat reminded the world that Breitling had essentially invented the modern mechanical chronograph. The message resonated and the brand prospered. The Chronomat Collection is a fitting tribute to the amazing watch that, more than any other, put us back in touch with our heritage.”

Breitling had used the name Chronomat for some of its 1940s watches, and, in those early days, the word was a portmanteau of “chronograph for mathematics”. The 1984 Chronomat expressed something different: “chronograph” and “automatic”, a name that called attention to the self-winding mechanical movement powering the watch.