Watches of Switzerland is proud to unveil the new Breitling Navitimer B01 Chronograph collection. Seventy years on from its debut, the new Navitimer captures the classic features of this iconic watch, while enhancing them with modern refinements. A sleeker case, more dial colours to choose from and expert finishing are just some of the enhancements you can expect, along with a few subtle nostalgic touches sure to satisfy even the most discerning of enthusiasts. Available for pre-order now from Watches of Switzerland, read on to learn all about the new Navitimer B01 Chronograph collection and its rich history. Birth of an icon

Considered the ultimate aviator’s tool watch, the Navitimer first took to the skies in 1952. However, the story really starts some twenty years earlier, when Willy Breitling became the third-generation to take over the reins of the family business. Having witnessed the rise of military aviation and already sensing the role aircraft would play in the future of the modern world, Mr. Breitling began to focus on this burgeoning industry, establishing the “HUIT Aviation” department to meet the military and civil-aviation sectors’ need for reliable onboard instruments. This decision would kick start a chain reaction that still intimately links Breitling with the world of aviation to this day.

A decade later, Breitling patented an innovative circular logarithmic slide-rule applied to a chronograph, capable of easily handling a wide range of mathematical operations with tachymeter, telemeter and pulsometer functions. This model was the Chronomat, a legend in its own right and something of a forerunner to the Navitimer.

By this point, Breitling was a well-known name in aviation circles and so, in 1952, the renowned US Aircraft Owners and Pilots Association (AOPA) formally asked Willy Breitling to create a new chronograph for its members. Borrowing the slide rule originally introduced on the Chronomat, the 1952 Navitimer prototype enabled an array of flight calculations. (Hence the name: “navigation” + “timer”.) These included: average speed, rate of climb or descent, distance travelled, fuel consumption, and conversions from miles to kilometres or nautical miles. The slide rule was moved via a rotating bezel edged with beads for improved gripping when wearing heavy pilot gloves. Readability was enhanced with a generous 41 mm case diameter (large for its time). As well as oversized Arabic numerals filled with radium set against a black dial. Extremely useful to pilots and having a unique aesthetic, the members-only chronograph was an instant hit amongst AOPA members.

So much so, that it was decided to make the Navitimer available to the public in 1956. Unlike the association’s batch, which was marked only with the AOPA insignia, the production version featured the Breitling name above a stylised wing logo. It was also stamped with its now iconic 806 reference. With the major airlines of the 1950s competing to offer transatlantic passages, the unprecedented Navitimer became standard equipment on every civil pilot’s wrist. (Making Breitling the official supplier to world aviation.) During the 1960s, the dial was changed to house contrasting subdials in white. (An aesthetic initially launched on the SuperOcean in 1957.) The bezel evolved from “beaded” to “serrated”. And around 1965, the famous twin-jet logo appeared.

In 1969, the Navitimer was fitted with one of the world’s first automatic mechanical chronograph calibres. The same year saw the case size enlarged to an unprecedented 48 mm, gaining popularity among a younger, trendier clientele. (Though larger than other watches, its short lug design still made it comfortable to wear). The classic 41mm version still remained in production though, receiving a useful date indicator in automatic and hand-wound versions. Ultimately, the Navitimer’s unique design and wrist appeal made it a success beyond the aviation industry. Many celebrities, including Miles Davis and Formula 1 champions Jim Clark, Graham Hill and Jo Siffert were wearers of the pilot’s watch. In 1962, a version designed by astronaut Scott Carpenter joined the line-up. Used during his mission aboard the Aurora7 spacecraft, it featured a 24-hour dial. (In space it’s impossible to distinguish between night and day.)

Spanning 70 years, the Navitimer stands as the most iconic Breitling wristwatch ever made. (And one of the most recognisable models of any manufacture.) It houses the brand’s most complex and prestigious movements, including the Breitling Manufactured Calibre 01 since 2010. And it remains the ultimate wrist-worn instrument for pilots to this day. Since Georges Kern’s appointment to CEO, the Navitimer has become more wearable with smaller diameter options. Previous updates have also reduced the case thickness and introduced new shortened lugs. The 2022 update gives a nod to these classic features while enhancing them with modern refinements. It’s fair to say the fundamentals haven’t changed on the latest iteration of the Navitimer collection; central time display with three sub-dials surrounded by the signature slide rule. But look closely, and you’ll notice several special details that characterise the new Navitimer B01 Chronograph. For one, the (previously slanted) slide rule has been flattened. The redesigned case therefore has a thinner profile, which coupled with a domed sapphire crystal, makes for a sleeker overall design. Likewise, alternating polished and brushed finishing give a lustrous, yet understated aesthetic. Other changes include the date window being integrated with the chronograph hour counter, as well as the finishing of the sub-dials themselves. A nice nostalgic touch to this modernised update is the return of the AOPA insignia to the dial.

More apparent than the finer details are a new range of dial colours. Shades of blue, green, copper and silver (as well as classic black) define the new watch faces. There’s also a new set of flat semi shiny alligator straps to go with the collection. On the technical side, the oscillating weights have been redesigned to accommodate the changes to the case. Coming in two finishes – silver for steel models and gold for gold models, they are an impressive update that expose more of the Breitling Calibre 01 for better viewing. The COSC-certified self-winding movement features a column-wheel design with a vertical clutch, ensuring very smooth action to start and reset the chronograph. It also has quick-set date and hacking seconds. Power reserve for the B01 is approximately 70 hours. 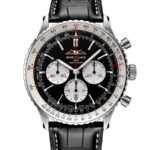 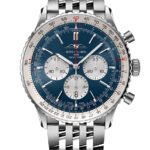 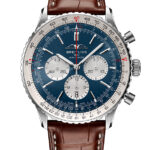 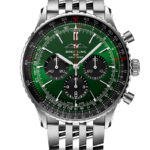 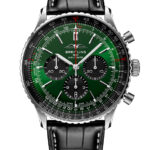 B01 Chronograph 46
In the largest format, steel models are available with black, blue and dark green dial options. All can be purchased on either a 7-row metal bracelet with butterfly folding clasp. Or the new, aviation-inspired alligator strap. 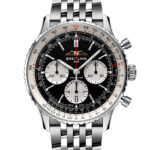 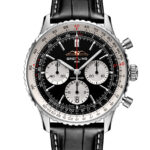 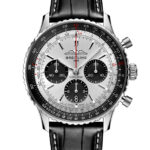 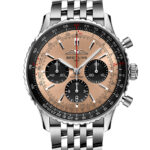 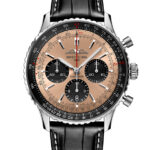 B01 Chronograph 43
At the 43 mm diameter, there are four steel options, with black, silver, ice blue and copper dial hues to choose from. Watches of Switzerland will also be stocking a gold version of the Navitimer B01 Chronograph at this size. It pairs 18k red gold with a black dial. All 43 mm models can be purchased on an alligator strap. Steel models with black or copper dials are also available paired with the metal bracelet. 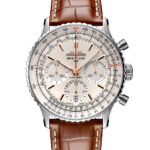 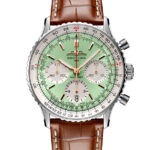 B01 Chronograph 41
At the original 1952 dimensions, steel models are available with blue, silver and mint green dial options. All come on an alligator strap.

70 Years On And Still Sought After

Watch aficionados enduring 70-year love affair with the Navitimer is universal and doesn’t seem to be showing any signs of cooling off. Having undergone a number of refinements over the years, proud owners of the new version will no doubt appreciate this modernised timepiece, as well as its subtle nostalgic nods to the original icon. So, if you want the ultimate wrist-worn instrument for pilots on your arm, purchase the 2022 Navitimer B01 Chronograph through Watches of Switzerland today.

The Reverso by Jaeger-LeCoultre - 90 years young